Slope Grooming: How It Started 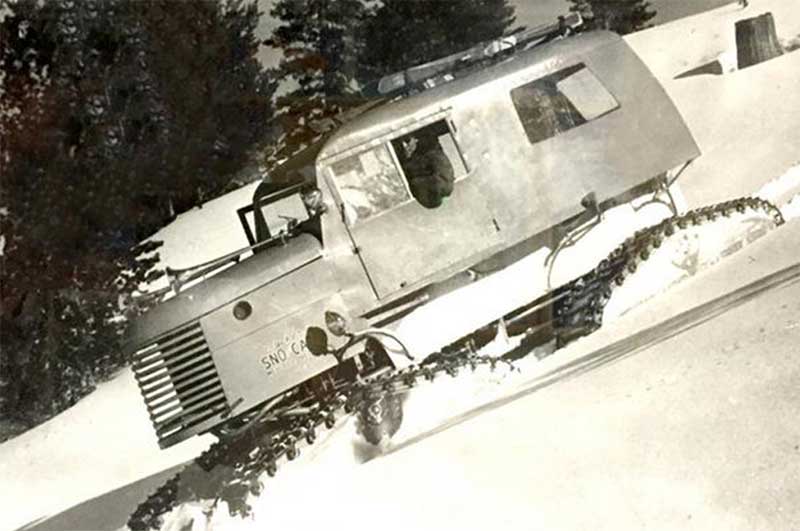 15 Nov Slope Grooming: How It Started

This article was written by Seth Masia and originally posted at SkiingHistory.org, reposted here with permission.

Swiss reader Luzi Hitz recently sent us a collection of photos of snow rollers used to groom pistes in Switzerland and France during the 1950s and 1960s. This photo, for instance, was apparently take on the St. Bernard Pass sometime before 1964. This raises the question whether any of these devices predate the packer-grader first used at Winter Park in 1950.
Well, yes and no. In both Europe and the United States, the process of rolling snow to achieve a smooth surface long predates the development of ski lifts and trails. Snowy roads were commonly packed out hard by hauling heavy agricultural rollers 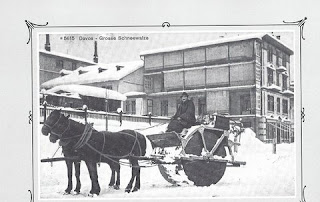 behind teams of horses. The purpose was to provide easy gliding for sleighs and sledges, and solid footing for the horses pulling them (horseshoes were often equipped with caulks to give them traction on hard and icy surfaces). In the American Ski Annual for 1945-46, Phil Robertson, manager of Mt. Cranmore, described using an agricultural roller in the fall of 1939 to pack down the early season snow so it would freeze to the ground and make a solid base for later snowfalls. The resort used a small Caterpiller tractor to haul the roller. European snowsports operators had the same idea in the prewar years, but by November of 1939 they had more pressing issues to worry about.

Repeated rolling did nothing to break up the icy surface that developed under heavy skier traffic, or after a melt-freeze cycle. Robertson wrote “We remedy this condition by scarifying late in the day, creating a powder surface which freezes during the night to the harder snow below. This operation is carried on with our invention called the Magic Carpet, a network of chains and caulks 10 by 14 feet, weighing 1200 pounds, which is hauled over the slopes with a tractor.” Find photos of this device in action accompanying Jeff Leich’s article on early snowmaking and grooming in the Spring 2002 newsletter of the New England Ski Museum.

After the war, new resorts used pre-war grooming methods. Despite the development of early snowmobiles (and the 10th Mountain Division’s Weasel), no over-the-snow vehicles yet existed with the power to drag rollers through the deep soft snow found in the Western states, and bulldozers were too heavy – they sank out of sight.

In the United States we generally credit Steve Bradley as the father of snow grooming. Bradley assumed management of Winter Park in June of 1950 and immediately began working with Ed Taylor on ideas for stabilizing and smoothing the snow surface. Taylor, a member of the Winter Park board of directors, was a former chairman of the National Ski Patrol and had a special interest in snow physics, based on his work controlling avalanches.

Bradley and Taylor appear to be the first experimenters to focus on the problem of smoothing out moguls. At the time Winter Park was smoothing out moguls manually, by sending out teams of men with shovels. According to Jerry Groswold, who watched Bradley and Taylor at work, they tried a number of devices to automate the process, beginning with their own version of Cranmore’s Magic Carpet, a six-foot length of chain-link fencing they pulled down the slope while skiing. 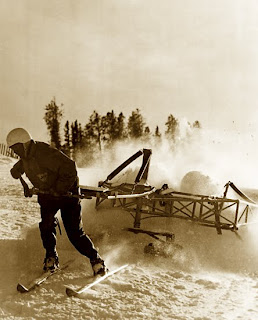 By the close of the year Bradley had designed and built a roller design, but with a difference: First, it was a “slat roller,” which had the effect of packing half the snow and “powdering” the rest for a soft, skiable surface. Then, in front of the roller he put an adjustable steel blade, spring-loaded to shave the tops off moguls. It worked like a road grader and steamroller ganged together. It wasn’t just a packer-and-smoother: it was the Bradley Packer-Grader. The January 15, 1951 issue of the National Newspaper of Skiing reported on the successful use of the Bradley XPG-1 — X for experimental, PG-1 for the first packer-grader.

The gravity-powered Packer-Grader weighed about 700 lb and was steered by a skier. The technique: go straight down the fall line, depending on the blade for speed control. At Winter Park, Bradley sent teams of “pilots” down the mogul fields in V-formation, like a squadron of fighter planes. According to Groswold, they earned 25 cents an hour “combat pay” over and above the trail crew wage. Rig and pilot returned to the top of the hill via T-bar.

Bradley filed for a patent in December 1951. By 1952, Fred Pabst was using his new Tucker Sno-Cats to pull slat rollers up and down the Bromley slopes.

Patent number 2,786,283 was issued to Bradley in March, 1957, covering “Apparatus for grading and packing snow.” That year Bradley mounted a Packer-Grader behind one of the new Kristi snowcats just going into production in Arvada, Colo., rigging a hydraulic cylinder to control blade height in place of the original steel spring. Thiokol Corp., then beginning snowcat production in Utah, licensed the Packer-Grader technology and modern powered snow grooming was born.

Returning to the St. Bernard photo: Note that this is a slat roller machine without a grading blade, and that the skier behind the roller controls the speed by sideslipping or snowplowing. A note on the French website http://www.skistory.com/F/domaines/B32.html suggests that more sophisticated powered grooming machinery was introduced by Emile Allais, who arrived at Courchevel in 1954 after having worked in North and South America since the opening of Squaw Valley in 1948. He brought American and Canadian ideas with him.

Leave a comment with your thoughts on this article!